Heather's fundraising is "On Fire"

Posted by Sahara Fleetwood-Beresford on May 19, 2018
I spoke to the wonderful, and very talented, Heather Onfire about her latest fundraising escapades! Heather launched her fundraising Facebook page today to celebrate World IBD Day.

I am personally a huge fan of Heather’s “bits” (oooerr), and Heather herself actually, so I am really excited to be able to tell you a little bit about what she’s doing to raise funds for #IBDSuperHeroes and Cure Crohn’s Colitis! I spoke to Heather yesterday:

What made you want to start fundraising and why is it important to you?
I wanted to start fundraising again because I know how vital the funds are to help researchers find a cure for IBDs. Without the money, research goes too slowly and in the meantime, more and more people are suffering (some dying from complications of the diseases). If I can be part of helping to keep the research going then hopefully cures will happen sooner. I really wouldn’t want anyone going through what I’ve gone through since 2004 with my Crohn’s disease, and that’s why it’s important to be part of the solution.

Why did you choose #IBDSuperHeroes and Cure Crohn’s Colitis?
I have found #IBD Superheroes to be the most comfortable support group to be involved with. I love the superhero element to the group which really empowers me rather than making me feel like a victim of my disease, I am owning it instead. The fact that IBDSuperHeroes supports Cure Crohn’s Colitis makes absolute sense to me. All funds raised go directly into the right areas i.e. research, not wages for chairmen and board of director types. Everyone involved dedicates their time freely. I just think it’s a better use of all the hard earned money donated through fundraising.

What exactly are you doing?
I decided to make things as I’m quite crafty. I really enjoy what I’m making and it’s great to see people donating partly because they want to own what I’ve made, but also to support the charity. I’m making IBD related keyrings which are all hand sewn. Plus later on, I’ll make non-related products but still with all monies going straight to Cure Crohn’s Colitis. 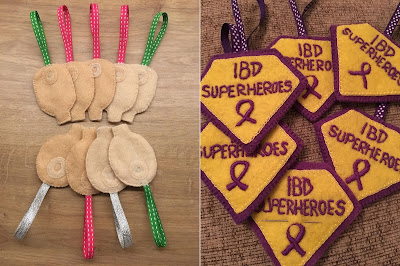 Do you have a fundraising target?
I kind of have a target of £2004 purely because 2004 was the year my IBD story began.

Do visit Heather's page here and make some purchases!