Posted by Sahara Fleetwood-Beresford on May 18, 2018
Andy Whittamore, 29, a Crohn’s sufferer from Luton, Bedfordshire is holding a Family fun day and charity football match at Creasey Park Football Centre on June 30th, and hopes to gather the support of the local community! 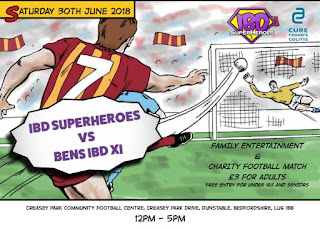 Andy, who works at DW Fitness First in Dunstable was diagnosed with Crohn's Disease 6 years ago, but his diagnosis hasn't stopped him pursuing his hobbies, and he is actively involved in local theatre groups; The Griffin Players, and Pheonix Players.

I had the opportunity to catch up with Andy, to ask him about his fundraiser:

What made you want to set up a fundraiser and why is it important to you?
Fundraising is something I’ve grown up doing, when I was in the Scouting Association I did a walk for wildlife raising money for the WWF, who work on the conservation of endangered species. I decided to set up my own fundraiser because I don’t think there is enough exposure to illnesses such as Inflammatory Bowel Disease.

Why did you choose #IBDSuperHeroes and Cure Crohn’s Colitis?
I chose #IBDSuperHeroes because it‘s a wonderful group of people with the common goal of raising awareness of IBD and raising money for a cure. I’ve made so many friends with IBD through this group and to host this event in their name is an honour.

Another reason I chose this group is because 100% of any donations to Cure Crohn’s Colitis are invested in research for a cure which is rare for any charity.

My reasons are also slightly selfish as I am a sufferer of Crohn’s Colitis. I think I’ve been fairly lucky with how my Crohn’s has been. Apart from 2012 when I was diagnosed, I’ve basically been in remission since then, unlike many of those who suffer daily, and those who have lost their lives, like a couple of people I got quite close to, due to complications with their IBD.

As well as myself, there are a few members of my family who suffer from IBD, so I’m raising funds in the hope that if I ever have a family of my own, future generations won’t have to deal with it like I, and the people I care about have.

What will be happening in the day?
Apart from the main event of the football match, which kicks off at 1pm, we have several activities for families to get involved with, from face painting to having a go on the bouncy castle! There will also be refreshments, a bar and an Ice Cream Van! Once the match is over there’ll be a raffle, so a chance to win some amazing prizes as well as a selection of stalls on the day. I don’t want to give too much away so come check it out!

Do you have a fundraising target?


I have an overall target which this event will help me towards reaching, I have a few events lined up which should, over the next couple of years, help me achieve my main target, which is £10k. I have got a JustGiving page which can be found here.

For more information about the event and to join us and show your support on the day, visit the Facebook event page.