Do you really know where your charitable donations go? A few figures

Posted by Sahara Fleetwood-Beresford on April 21, 2017
In March 2014 I began a project raising funds for the UK’s biggest Crohn’s and Colitis charity and after 21 months of constant fundraising, in December 2015 we had hit a grand total of £45,000!

I know what you’re thinking “That’s AMAZING” right? Of course I thought the same, until I began to look properly in to where those funds were invested by the charity. For example, looking at the yearend accounts for 2015, I can see that a mere 10% of total donations were invested in to research, and a whopping 39% on staff costs... 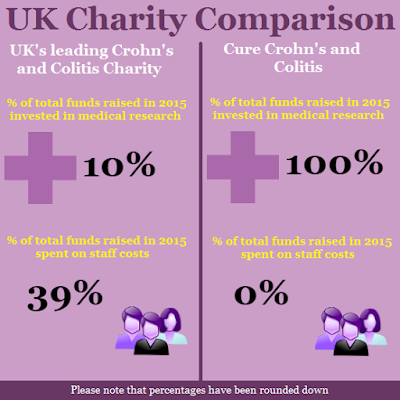 Current vacancies at Crohn’s and Colitis UK:
Publications Information manager: £40,000 per annum
We couldn't even keep up with paying this one staff member

If I had known then, what I know now, that whole £45,000 would have gone to research via Cure Crohn’s & Colitis, but alas, I did not look, and I did not know, and I can honestly say that I am gutted about that!

I have since learnt my lesson, and along with Corinne Burns started fundraising project IBDSuperHeroes in January 2016. Our tag line is ‘fighting to cure Crohn’s and Colitis’, and this time we actually are!

Our total is not as grand as the previous project, and currently stands at £11,584, but every single penny of that has gone, or will go to research to ultimately find a cure for Inflammatory Bowel Disease. It has taken us just over 15 months to reach this goal.

The previous project, which is still being run by a few of the ladies I worked with, has now raised a fabulous £61,674, and that has take just over 3 years (37 months), meaning (based on 2015 percentages) around £6,167 of that goes to research and £24,052 on staff costs, and as we’re aware from above, that isn’t even going to a cover ONE persons annual salary...

I work in Marketing, so I completely understand the need to spend money to make money. Without spending money on marketing staff / materials and PR people to get you in the media and event organisers to get your walks in front of the relevant audience, you simply will not become well known enough to be 'raking in' donations. Essentially, these are businesses as much as they are a charity.

I guess it’s all down to personal preference, where you want your hard earned money to go. Personally, I want my time and effort to be invested in to research for a cure.

I urge anyone looking to fundraise for Crohn’s Disease and Ulcerative Colitis to PLEASE take some time to think about where your ultimate goal lies and ensure that you are fundraising for a charity which aligns with them.