There's no dignity in IBD

Posted by Sahara Fleetwood-Beresford on December 02, 2015
I usually ramble on in my blogs so I have set myself a challenge – 200 words max per blog for Crohn’s and Colitis awareness week!

Living with a lifelong and incurable disease can cause many changes in the way a person lives their life.

What is one of the things you feel that you have lost since having IBD? 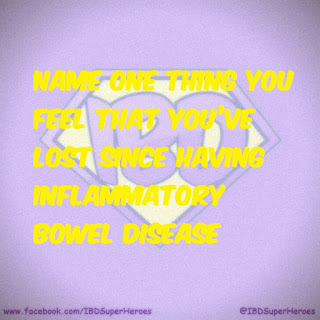 If I’m to choose only one thing then I’m going to have to say, my dignity. When you’ve had cameras and fingers stuck up your bum, laid in your own waste because you’ve shit the bed or had a bag leak and someone else has had to clean it, and you up, been showered by someone you’ve never met, vomited on yourself, vomited on other people, cried and shouted at everyone for everything and nothing, had to be taught to walk again because your muscle fecked off when you were ‘laid up’ and have to administer your own enemas to treat a flare, it’s pretty safe to say you’ve nothing even closely resembling dignity left.

So… you can usually find me making an arse of myself in public somewhere, be it in a ridiculous hat, dancing like a moron, singing badly, falling over, flashing my bum, shouting at people in a pub toilet or just generally embracing my geekiness for the world to see.

There’s a lot of fun to be had when you have no dignity left! Maybe you should try it some time. It’s the kind of freedom everyone should experience at least once in their life!