Posted by Sahara Fleetwood-Beresford on December 03, 2015
I usually ramble on in my blogs so I have set myself a challenge – 200 words max per blog for Crohn’s and Colitis awareness week!

In the same way that a lifelong, incurable disease can have a negative effect on your life, it can also be the start of some positive changes. Tell us what you have learnt or gained since having IBD. 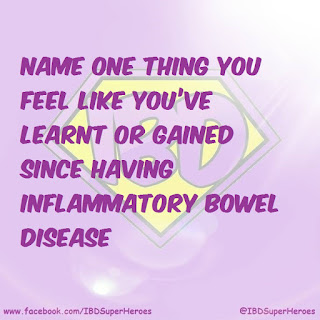 The best thing I’ve gained since having IBD is a new attitude in life. I’ve nearly popped off the planet a few too many times at the ripe old age of 27, and living as a ‘sick’ person means you have to make the best of your ‘well days’.

Life’s too short. I’ve a low tolerance for bullshit and drama. I like to ask myself, on a scale of 1 – death, where is this issue? Does it actually need my attention? Will it change my life if I ignore it? Is it worth getting stressed and possibly flaring over? If the answer’s no, don’t bother.

I want to do things that scare me. People often ask “brave or stupid?” about certain people or situations. I believe there’s generally an aspect of stupid in brave, but being scared makes you feel more alive. I want to know that I’ve pushed the boundaries for myself and the boundaries of others. I want to go on the biggest rollercoasters, play with snakes (massive fear), throw myself out of planes (I’m scared of planes AND flying), because when you’ve done something you thought you could never do, you’ve ACTUALLY achieved something worth being proud of.