Posted by Sahara Fleetwood-Beresford on May 15, 2014
I’ve asked some of the lovely IBD community to share their stories with us for World IBD Day! This is my first  featured guest blog from the lovely Lisa Cummins and here is her story…

Hi, my name is Lisa Cummins I’m 27 and I got diagnosed with ulcerative colitis at 18.
I was still in secondary school.
A few weeks before I got my Christmas break I got a stomach bug and I was vomiting and had diarrhoea.
I went to A&E and the doctor in there gave me fluids and sent me home. That had past and I went back to school. So we finished up for Christmas.
A few days into the holiday I wasn’t feeling great thinking the bug had come back but It was much worse I couldn’t eat or drink as I couldn’t keep it down. I was throwing up bile.
I missed my Christmas dinner which I always look forward too. Thinking back now as I write this I don’t remember much of Christmas week.
I was sleeping so much and I was constantly getting sick. My mam brought me up a drink called dioralyte to try help me keep up my fluids but I kept bringing it back up.
Then one day my mam came in to check on me and couldn’t wake me. My aunt was over visiting and my mam called her and my dad and immediately took me into the hospital.
I don’t remember the first few days in there as I was in and out of consciousness. I wasn’t put on a ward for a while I was left on a trolley in a plaster room. Both my parents were always by my side taking it in turns.
I don’t remember what was going on and I still don’t to this day it’s all a blur. I was told that the doctors had given me loads of IV fluids and steroids and antibiotics.
They had given me a camera test and I was so inflamed in my intestines they didn’t want to operate as they said I was so young and wanted to try IV things first and lucky it worked and I kept my bowel.
They said if I had of came24hrs later they would have had to remove it. I was in hospital for a month.
I had loads of tests done and X-rays and they told me I had UC. For the next few months I was on a liquid diet of yummy fortisips. Yuck.
Because I was in bed for so long I hadn’t used any of my muscles and I had to try walk again which was hard for me.
Eventually I was allowed to start on food I was so scared to start eating. I was crying as I was afraid I’d get sick again it was so difficult. But I managed to do it and I got home.
I had lost so much weight i was wearing size 12 clothes and now I was into 6. I was down to 6and a half stone.
I was put on a medication called pentasa for my UC and I also found out I was anaemic so was put on iron tablets for that. But I had to have an iron infusion, Plus my periods had stopped for over a year too.
A few years later before my 21st birthday I got sick again and I had the same symptoms and thought it was a flare up. But I had caught C diff. I was kept in hospital for 2 weeks. I was then put on a medication called immuran.
When I was 23 I got a skin condition on my right foot called pyoderma. It caused my foot to swell, go red and get very hot and I couldn’t walk. It was like my skin was dissolving I ended up with a hole on the side of my foot. Luckily the doctors managed to control it with antibiotics and steroids.
Then at 25 I had a abssess near my back passage and I had to go to A&E with that and they operated on it and I was kept in for three days. At this point I was out of work. A month later I was back in hospital with swelling and bruising on my left leg it was red hot.
I was kept in for 4days and they said I had erathema nerdosa they gave me steroids and it had gone away and I was let home.
I’m now 27 I was taken off the immuran in January as I was told only allowed on it for five years. I was suffering with lower back pain and swelled right knee and stiff joints.
I was put on humria injection which is a biological.
So far so good it’s helping me. I’m back eating the stuff I had to stop eating and I’m going the loo less now. I’m also back up to a healthy weight So fingers crossed it stays that way.
I was always In and out of work over the years as I was so sick. I have since graduated college and I’m now a Montessori teacher. I couldn’t have gotten through this without the help,love and support of family. It’s been tough on us all but we are a strong close family who I love so much.
Thank you for taking the time to read my story. X 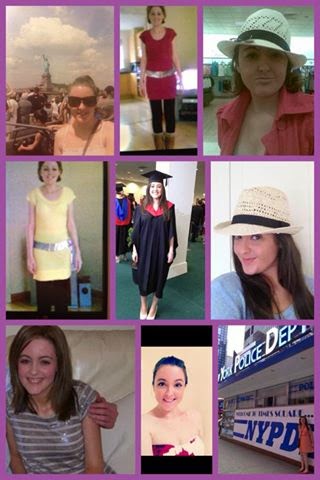