Where my awareness raising / fundraising began...

My first awareness post on Facebook. It was born out of anger and frustration and the lack of understanding out there of Inflammatory Bowel Disease. It's had over 1.5K shares, but, you can never have enough awareness! 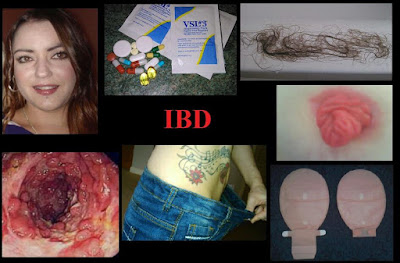 
Seen as sharing disturbing photos in aid of raising #awareness is the current trend, I want to raise awareness of something that matters to me... #IBD
*Moonface from steroids.
*The meds I take every morning.
*The hair I lose every day when I wash it due to malnutrition & med side effects.
*The age 11-12 jeans that are way too big now.
*Bowel disease.
*My old #stoma.
*#Colostomy bag.
There is currently NO CURE for IBD.
IBD is in NO WAY related to IBS.
IBD stands for Inflammatory Bowel Disease and includes #Crohns Disease, Ulcerative #Colitis and a more recently identified form of bowel disease, #Pouchitis (Inflammation of the surgically formed internal pouch)
IBD is an #autoimmune disease which means your immune system attacks your own body.
Symptoms can include excruciating pain, weight loss, diarrhoea, malnutrition, #fatigue, anaemia, faecal incontinence, skin conditions such as psoriasis / eczema, vomiting, dehydration, strictures (narrowing of the intestines), partial or complete bowel obstruction, ulcers throughout the whole digestive system, the list goes on.
Medication treatments for IBD include antibiotics, probiotics, steroids, immunosuppressant's, TNF blockers via injection or intravenous infusions.
Side effects from these drugs can be just as debilitating as the disease itself causing issues such as weight gain, weight loss, hair loss, moonface, acne, dry skin, mood swings, #depression, susceptibility to infections resulting in hospitalisation, excess hair growth, excess sweating, vomiting, #anxiety, fatigue, restlessness, insomnia, unexplained bruising, heart problems, thinning of the skin, muscle loss / weakness, increased risk of some forms of #cancer, hepatitis, osteoporosis (weakened bones) the list goes on.
Treatment of symptoms also requires medication such as pain relief, loperamide, iron injections, antidepressants, sleeping pills, vitamin supplements, a lot of which come with their own side effects.
Often more medications are needed just to counteract the side effects that come from the medications needed to treat the IBD!
IBD often results in major surgery to remove the diseased intestine which leaves sufferers with shortened digestive systems, stomas / colostomy bags, internal pouches and in some cases reliant upon TPN (drip feeding) or PEG feeding (a feeding tube passing through the abdominal wall) which means patients may then go on the bowel transplant list which is a relatively new procedure.
Surgery often brings with it more complications such as fistulas, infertility, narrowing of the bowel causing obstruction and so on.
Routine testing for IBD patients include bloodwork, colonoscopies and MRI scans. More tests are also needed when taking certain medications such as chest Xrays and bone density scans.
Living with IBD is by no means easy yet there is so little awareness of the condition!
If you've managed to read all the way to the end of this post then I massively appreciate that.
Please share and help raise awareness of IBD, a disease that people are not currently very aware of. Surely that is the idea of 'raising awareness'
Fundraising for Cure Crohn's and Colitis via #IBDSuperHeroes - Text CCSH90 and your donation amount to 70070
www.justgiving.com/IBDSuperHeroesCureCC
www.facebook.com/IBDSuperHeroes